Top 10 Most Expensive Pizzas In The World: Pizza is definitely one of the most popular Italian dishes in the world. And throughout ancient history, there are records of individuals flavouring bread with other substances.

As seen in The Achaemenid Empire’s Persian armies where they baked flatbreads with cheese and dates on top of their battle shields in the sixth century BC, and the ancient Greeks enhanced their bread with oils, herbs, and cheese

According to Wikipedia, the term pizza was first recorded in the 10th century in a Latin manuscript from the Southern Italian town of Gaeta in Lazio, on the border with Campania.

The majority of pizzas only cost between $5 to $20! However, if you’re in the mood for a luxurious indulgence, you might want to spend a little extra money to sample one of the most expensive pizzas in the world.

Since it’s not difficult to come up with novel pizza topping combinations, many chefs from across the world have made an effort to make the best pizza possible.

Pizza can be purchased whole or in bite-sized slices, fresh or frozen. Challenges include keeping the sauce from mixing with the dough and creating a crust that can be frozen and reheated without becoming rigid have been overcome using techniques.

Take-and-bake pizzerias offer an additional variety of pizzas. This pizza is put together in the store and then sold to consumers unbaked to bake in their personal ovens. Some grocery stores provide the fresh dough, sauce, and other essential ingredients that may be assembled at home and baked in an oven.

Pizza lovers, do you salivate at the thought of a hot pizza topped with your favourite veggies, slivers of meat, and lots of cheese? However. the most expensive pizzas in the world come with opulent extras like truffles, caviar, and even gold and diamonds, so their price may seem a little out of the blue. We know you are definitely eager to know which pizza is the most expensive pizza in the world.

Most Expensive Pizzas In The World

Louis XIII is the most expensive pizza in the world which cost a whooping sum of $12,000. Every pizza lover’s fantasy came true when Renato Viola created Louis XIII for a restricted group of people.

It is a 20 cm diameter, little pizza that can serve two people. Renato Viola, a pizza cook, a sommelier (a wine expert), and another chef who prepared the ingredients before constructing the pizza worked as a catering team to produce it on-site.

The pizza is served with a cognac that complements the pizza’s unusual toppings and flavours the best in addition to the limited-edition silverware. The majority of the ingredients, according to Chef Viola, come from France and Italy.

The moist, chewy, and creamy texture of this pizza is a result of the mozzarella di bufala cheese, which is produced with the milk of local Italian buffaloes. The most expensive elements, in his opinion, were lobsters that had been cooked and flamed in cognac.

The most expensive pizzas also have Mediterranean shrimp species, Mediterranean caviar, and pink salt that has been hand-selected from the Murray River. 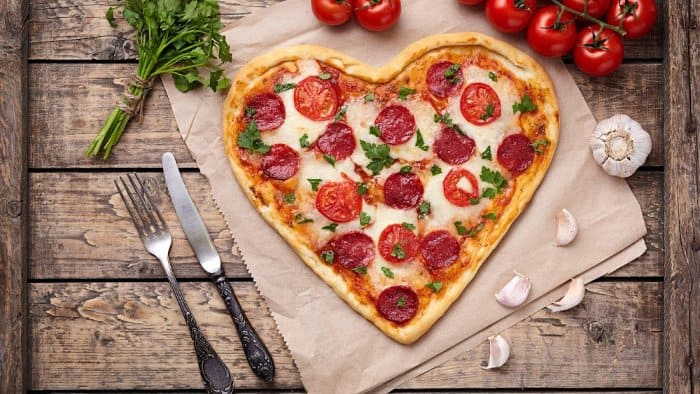 Due to the association with Valentine’s Day, the “Pizza for Lovers” at Favitta’s Family Pizzeria in Henrietta, New York, close to Rochester, is a fantastic marketing idea. However, it appears that the restaurant closed in 2008, therefore we assume that not many pieces were sold.

A diamond ring, a bottle of Dom Perignon, and sprinkles of diamonds were added to the heart-shaped pizza in addition to the usual toppings. The restaurant’s owners presumably anticipated that couples would propose there, so they devised the ideal way to pop the question. 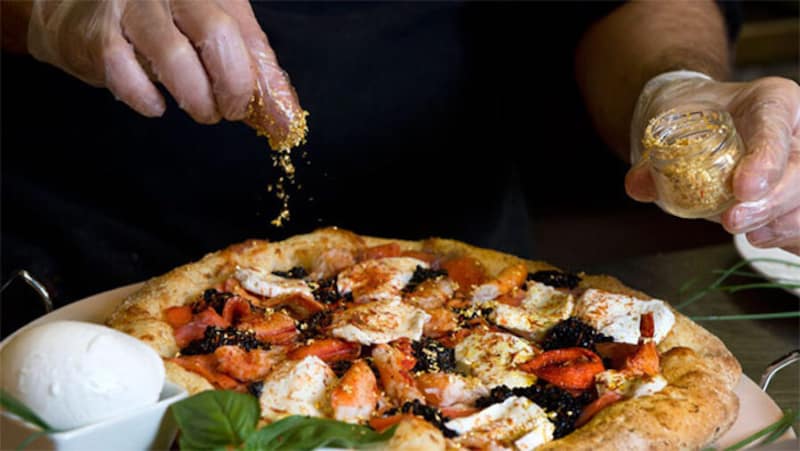 Another pizza on the list of the most expensive pizzas in the world is The Miss Verdun. This not-so-humble pie comes from Mizzou Pizza in Verdun, Montreal. The eatery offers the option of having a personal chef prepare the pizza in your kitchen.

One element driving up the price of this pizza is the chef’s service fees. The white truffles, caviar, lobster, and 24-karat gold flakes are the main components of this pie. Choose this pizza if you want to consume a nutritious meal that will badly deplete your funds. 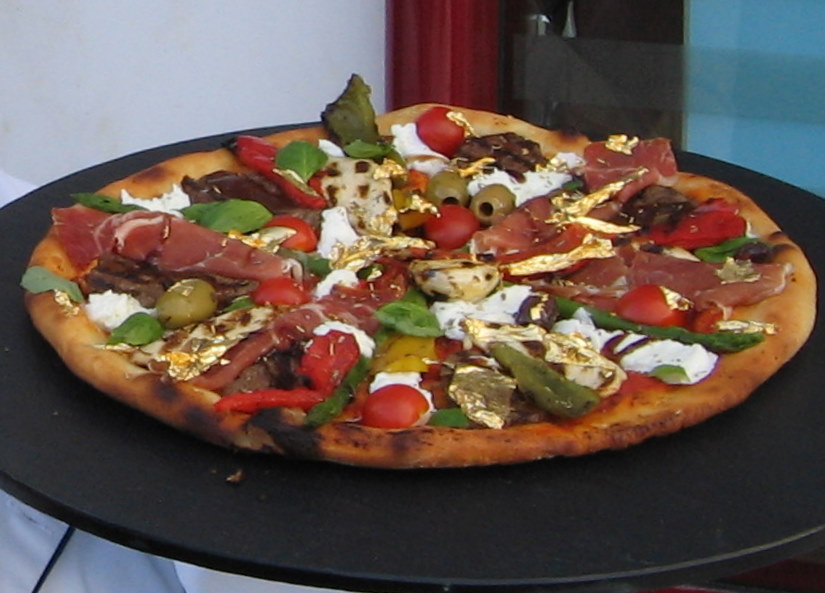 The Pizza Royale 007 is also one of the most expensive pizzas in the world. The pizza was crucial in assisting the Fred Hollows Foundation with financial support (an organization working towards preventing curable blindness in developing countries).

However, purchasing this pizza will make you wish for a charity as well, as Maurizio Morelli donated it to a charity auction as a Valentine’s Day gift for his girlfriend, priced at a stunning £2150 (about $2830 in 2019).

The pizza was made by renowned restaurateur Domenico Crolla, who went from Glasgow to Rome to prepare it. He adorned it with edible gold, lobster that had been marinated in cognac, deer medallions, Scottish smoked salmon, and caviar that had been dipped in champagne.

“Pizza Royale 007” by Domenico Crolla – $4200 The 12-inch pizza pie is stuffed full of some of the most costly ingredients in the world, including lobster marinated in cognac, caviar drenched in champagne, sunblush tomato sauce, and Scotti cheese. 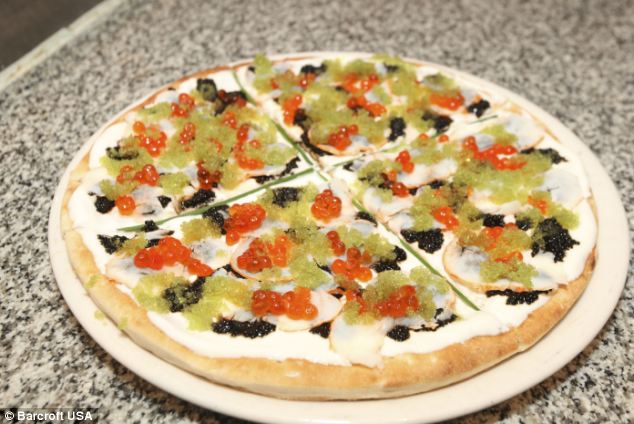 Owner of Manhattan’s Nino’s Bellissima Pizza, New York restaurateur Nino Selimaj is the man behind the magnificent pie. The large serving of caviar that is placed on top of the pizza, which costs $820 by itself, accounts for the majority of the price.

The luxurious delicacy, which ranks among the most costly pizzas in the world, has already sold hundreds of units. Among the caviar species chosen for Nino’s creation are two of the best in the world: the extremely flavorful Black Russian Royal Sevruga and the Beluga.

This pie, which was unveiled back in 2012, earned its price tag thanks to the $820 caviar garnish. Slices of lobster and crème fraîche are placed on top of the garnish, which is made up of large blobs of beluga and black Russian Royal Sevruga roe.

Owner Nino Selimaj says, “People who know about their caviar enjoy this pizza. Their well-off clients include politicians, Wall Street traders, and wealthy, infatuated couples. Pizza itself is a topic of talk because of the astronomical price, which constantly attracts new consumers. 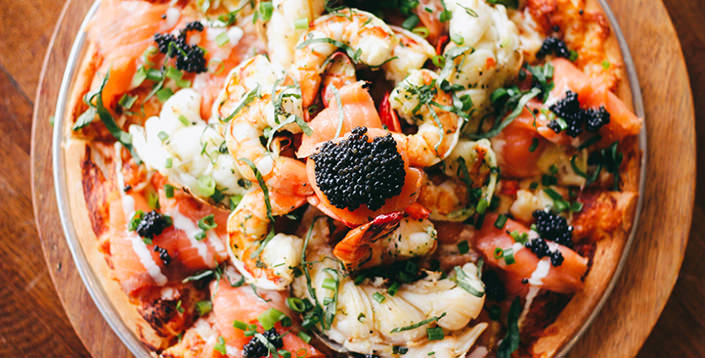 With his $45 a slice/$450 pizza, Steveston Pizza founder Nader Hatami discovered the marketing holy grail. Steveston Pizza is renowned for combining unusual flavour combinations to make inventive pies, and they have won numerous prizes to support their risky concoctions. Today, Steveston has only one branch outside of Canada, in the Philippines.

Pizza maker Hatami created the “C6” as a tribute to his love of seafood and fine ingredients. The pie may not be served frequently, but it is generating a lot of talk about the tiny pizza shop since it is loaded with lobster thermidor, smoked salmon, tiger prawns, and a side of Russian Osetra caviar.

This pizza is designed for seafood lovers. It is fresh and includes top-notch fish. This explains why it is so expensive. We are all aware that seafood can be a bit expensive. 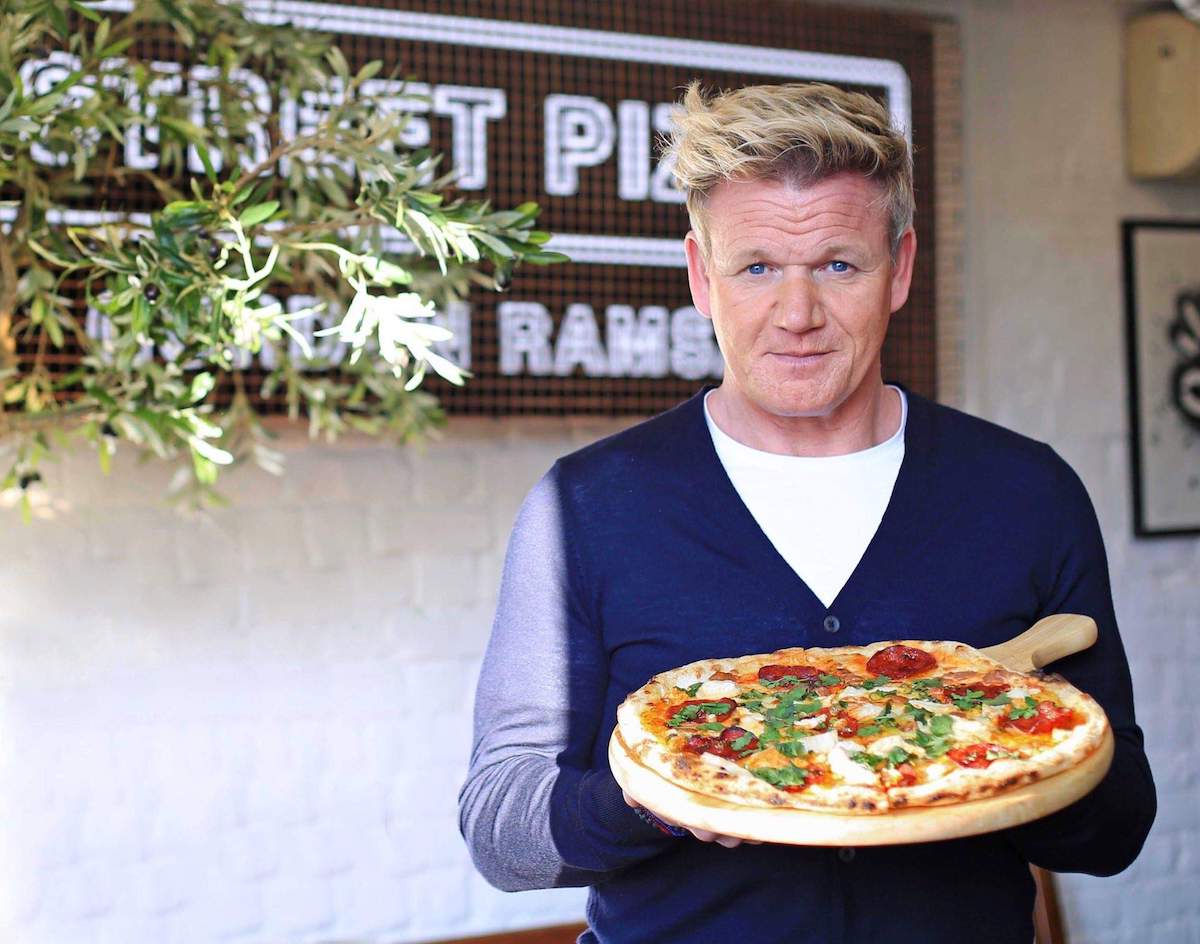 Gordon Ramsay, one of the best chefs in the world created his most expensive pizzas for the delight of his pizza lovers. At the Maze restaurant in London, one may anticipate that Mr Ramsey would be the one delivering it to you for such a high fee (however considering his temperament, it is probably not the best idea).

The pizza was also recognized as one of the most expensive pizzas in the world by the Guinness Book of World Records. Due to the chef’s choice of materials and toppings, including truffles, fresh herbs, pancetta, cep mushrooms, fontina cheese, buffalo mozzarella, white truffle pasta, and Italian onion puree, the pizza costs $250. Most Expensive Pizzas In The World

The Triple Mille-Feuille crust consists of three layers of thin ultra crispy crust with plenty of cheese sandwiched in between. It’s priced at $140 if you order all the toppings on top of it, which could make it extremely thick and quite difficult to eat, but in Japan especially, this pizza has been a major hit for years.

The texture of the vegetable toppings on the pizza is what stood out as being really exceptional. The crispness of the veggie toppings really shone out because the cheese and dough were soft. It was a genuinely fantastic pizza, and even when it was cold, it tasted good. We advise anyone who orders the pizza to save at least one slice for cold consumption. 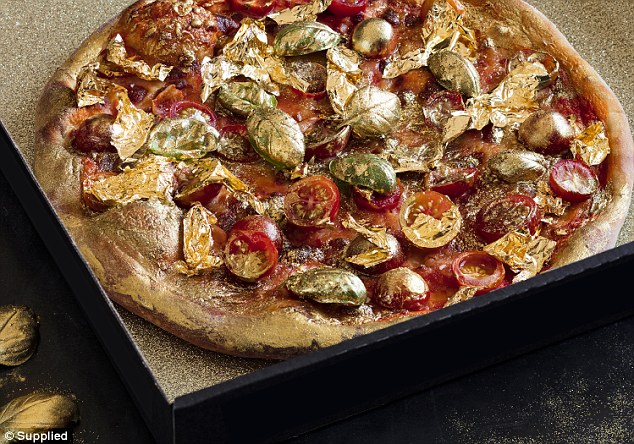 This gluten-free, vegan-friendly pizza was created by the Magic Oven restaurant chain in Toronto, Canada, and is topped with a 24-carat gold leaf. You could even eat the gold leaf because the components are so nutritious and wholesome.

Due to the beneficial combination of ingredients on these unique pizzas, they have occasionally been referred to as “pizzaceuticals.” 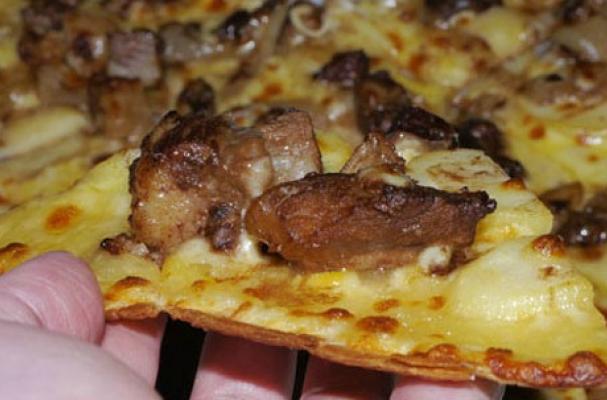 The Kobe Beef Steak Pizza is one of the top 10 most expensive pizzas in the world. It’s understandable why this behemoth is advertised as a “premium” pizza. Along with Kobe beef, the item also has cheese, potatoes, onions, and steak sauce on top.

According to early assessments, these flavour elements actually blend nicely together. One Japanese food blogger called it “pizza ecstasy.” It had better cost $66, though.

You will experience one of the best unusual ingredients you can possibly imagine if you want to taste this pizza. It includes delicate Kobe beef that is served rare. The other ingredients include things like potatoes and onions.

Pizza like this doesn’t exist anywhere else in the world. The exact cost is determined by the toppings you choose for your pizza. You can choose opulent garnishes like truffles, lobster, caviar, and fine cheese.

Here are the top 10 most expensive pizzas in the world:

Rarely is it possible to completely withstand the aroma of a properly made pizza. It is one of the few quick foods that most people can easily get and that is surprisingly healthful. Pizza is about as proletarian as food can be, despite its beautiful Neapolitan origins.

The inexpensive frozen pizza that a college student may purchase for under $5 is at one end of the spectrum and can be enjoyed to the fullest with a little heat and a stressed-out mind.

On the other hand, there are the most exquisite pies produced for the ultra-rich by the best chefs. Even if the thought of these pies might make one’s mouth swim, the price range would dry up both your pocketbook and your throat. We, however, hope you enjoy reading about the top 10 most expensive pizzas in the world