Right from the box, the I3T EOS Carbon Fiber flashlight is the newest tactical flashlight from Olight. Olight is known for making high-quality torches and flashlights, so the i3T EOS clearly isn’t less than the average. According to the tech-driven lighting company, I3T EOS is one of the best products they’ve ever produced. The flashlight has been created through a series of highly complicated processes involving the fusion of aluminum alloy and carbon fiber. And Olight claims they’re the first tech company to create a flashlight using the technique.

So if their claim is anything to go by, it’s worth noting that before I3T EOS, there had never been any fiber flashlights in the stores. Furthermore, most companies that manufacture these products use a carbon cover for decoration instead of unique traditional material. But Olight used both combinations to produce the I3T EOS Carbon Fiber flashlight. 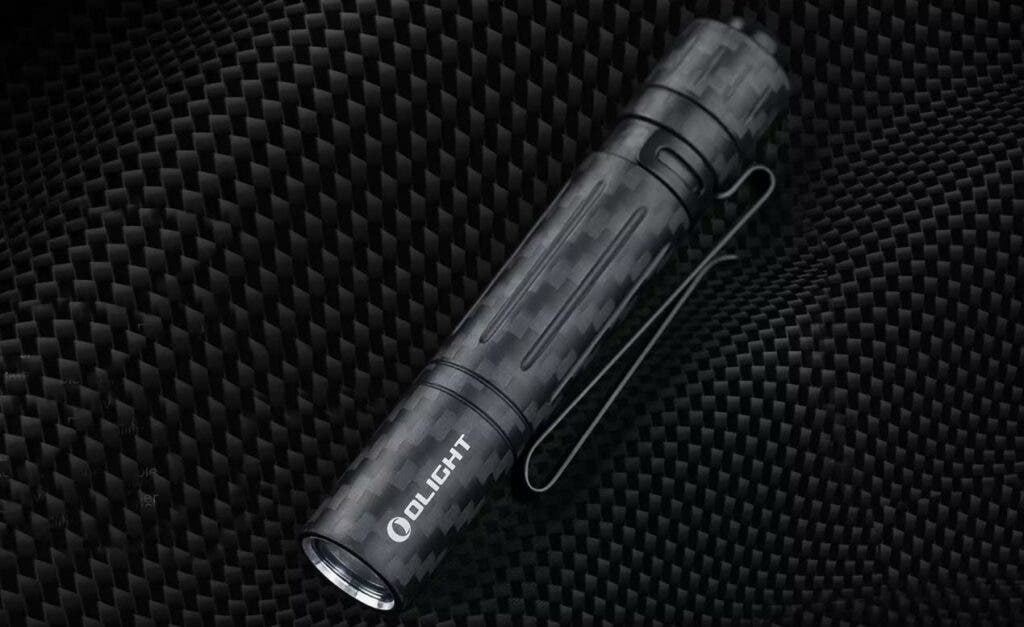 Most companies do not care much about the pocket clip when making flashlights. But that’s not the case with the i3T EOS. It comes with a clip that is firm yet not too tight. So it’s easy to store in your pocket without worrying that you might lose it.

The ability to resist water is essential for any flashlight. But worry not if you decide to go for the Olight i3T EOS because it can keep shining even after getting on the water. Being IPX8-rated, the flashlight can be submerged in any water body or a container with water whose depth is not more than 1 meter, and it still works perfectly.

Unlike other flashlights with switches installed on the sides, the Olight i3T EOS has its switch in the tail. Having the control on the tail makes it easy to operate and helps in clicking back and forth with a lot of ease. Besides, the button is made of rubber, and it goes beyond the light, making it easier to put on and off.

The Olight i3T EOS features an LED, which also comes in handy with a TIR capable of producing a balanced beam. The torch then has high and low brightness settings; (5 lumens and 180 lumens). Typically, 5-180 is a significant gap which is great for the flashlight. The low setting is good enough to help with tasks such as reading and general up-close tasks. At the same time, the high mode allows one to perform tasks which require more light, like seeing through the dark. Setting it is pretty simple. Through the tail switch, you can select different modes, and the switch produces a certain unique sound that further allows you to identify the mode.

The Olight i3T EOS comes with one AAA Alkaline battery which it operates on. Anyone familiar with 1×AAA batteries knows they’re lightweight and advantageous even in price. On the low setting, one battery will allow you up to 16 hours of continuous use, while on the high mode (180 lumens), it can operate for 21–25 minutes.