Bizarre as Zambian man cuts mother to pieces before burning, burying her

Shock and grief gripped residents of Chongwe who uncovered a gruesome murder of a 56 year-old woman who was mercilessly sliced and burnt by her son said to have mental illness.

Not even the cry of the woman who nursed him as a baby could penetrate to the conscience of 28 year-old Joshua Bwalya of Chansango village who killed his mother and buried her in a bush, 900 meters away from her house.

It is reported Ruth Nyanvula used all manner of sounds and she cried to be saved from her once innocent child, Bwalya who turned savage on her as he cut her into pieces and burnt her before burying her. 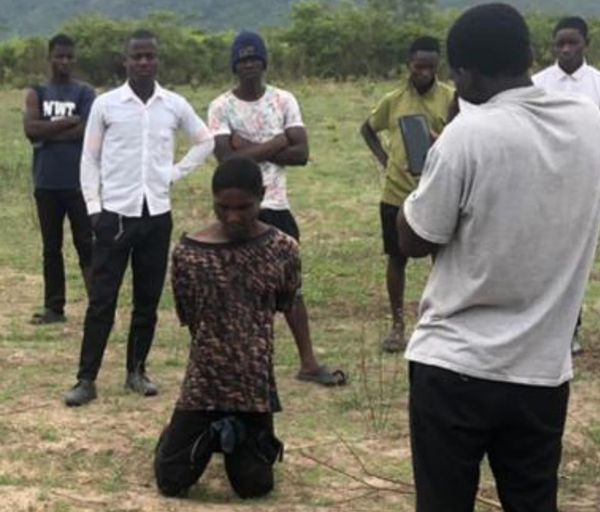 According to Police the incident happened yesterday around 23:00hrs near Mpango Secondary School in Chongwe.

Brief facts of the matter is that a pupil at the stated school heard the deceased cry out for help in her house located near the boarding school houses.

The pupil reported the matter to the head teacher but considering the time they failed to go to the house as the noise lasted for a short while.

However, around 08:00 hours the following morning, the head teacher, some pupils and community members went to to check Nyanvula’s house to find out what happened during the night.

When they reached the house, they did not find the woman but bumped into Bwalya nearby a bush marinated with blood stains all over his body.

When Bwalya was asked where his mother was, he lied that she had gone for a business errand.

Seeing through his lies disguised as truth, the the community members opened the house and discovered a pool of blood on the floor and that was when the head teacher called the Police.

When the police officers rushed to the scene they discovered the dismembered body and apprehended Bwalya who later showed them where he buried his mother.

Zambia Police deputy spokesperson Danny Mwale confirmed the incident and stated that the body of the deceased has been deposited in Chongwe District Hospital Mortuary awaiting postmortem.

Mwale added the suspect is currently detained in Police custody while investigations into the matter have been instituted.