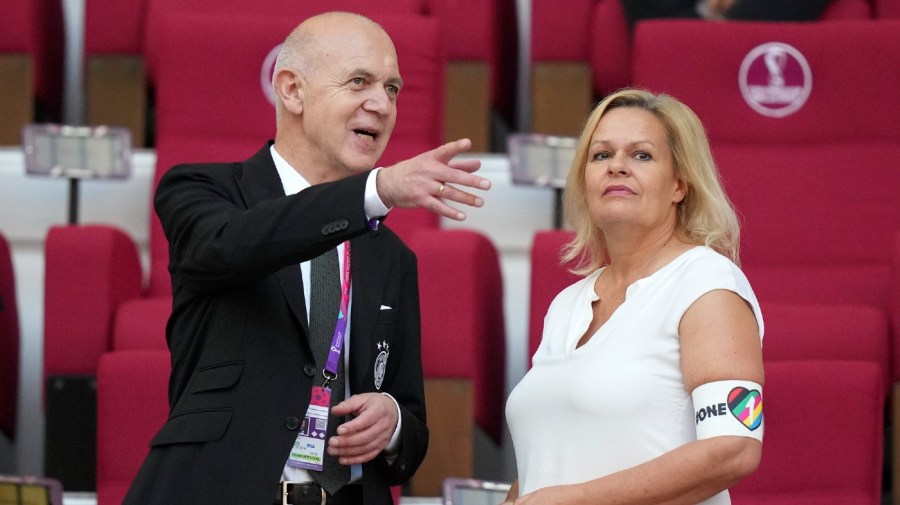 Both English and German soccer associations are considering legal action against FIFA after the sporting body banned players from wearing OneLove armbands promoting diversity and inclusion at the World Cup in Qatar.

The German Football Association (DFB) may file a claim at the Court of Arbitration for Sport in Switzerland to challenge the legality of FIFA’s threat to punish players wearing the armband, according to the German tabloid Bild.

“Fifa has banned us from showing diversity and human rights,” a DFB spokesperson told Bild in a statement. “She combined this with massive threats of sporting sanctions without specifying them. The DFB is checking whether this action by FIFA was legal.”

England’s football association is also considering legal action, according to The Telegraph.

Several European team captains had planned to wear the OneLove armbands at the World Cup to show support for the LGBTQ community, but homosexuality is illegal in Qatar and the armbands were seen as a symbol of protest.

FIFA this week threatened sanctions against teams if they wore the armbands, including issuing yellow cards to players who violate the ban.

The threats led to seven European teams abandoning a plan for captains to wear the armbands this week.

Secretary of State Antony Blinken said it was “concerning” to see the restriction on freedom of expression.

“It’s especially so when the expression is for diversity and for inclusion,” Blinken said at Doha’s Diplomatic Club on Tuesday. “And in my judgment, at least no one on a football pitch should be forced to choose between supporting these values and playing for their team.”

German soccer players held hands over their mouths before their match with Japan on Wednesday to protest the armband prohibition and several European soccer association officials lambasted the FIFA decision.

“From our point of view, this is more than frustrating and, I think, an unprecedented action in World Cup history,” he said.

Since being awarded this year’s World Cup in 2010, Qatar has come under fire for its criminalization of homosexuality and its treatment of migrant workers.

Blinken also applauded Qatar on its improved human rights situation during his speech earlier this week.

The Associated Press contributed to this report.

Who Is Wayne Deuce Boyfriend Of Cori Broadus, His Age, Girlfriend, Net Worth, Instagram

What Is Tyty Washington’s Real Name?

Right to property: Supreme Court changes its criteria and gives the green light to evictions in tomas | National

Is Something within the Dirt on Netflix, Hulu, HBO Max, or Prime?