Back to the moon at any cost 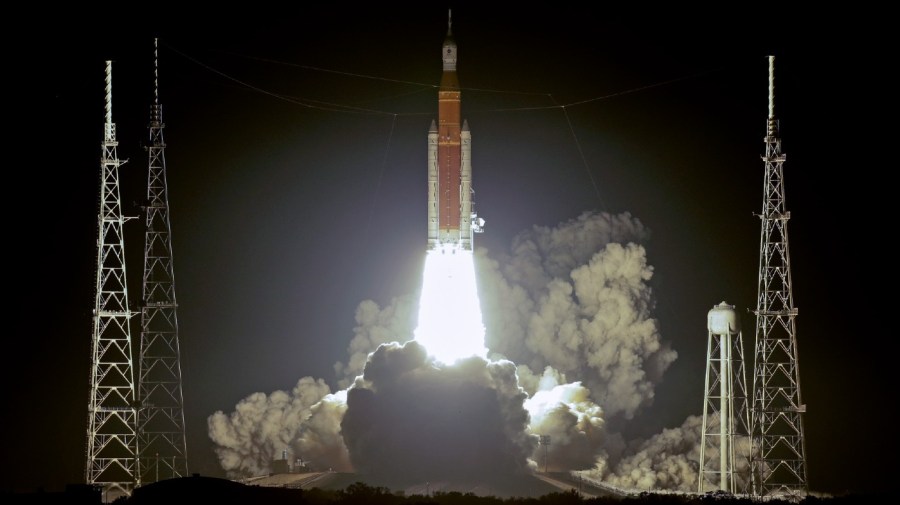 Most Americans were not alive the last time humans set foot on the moon. It’s become a dim cultural memory. It’s so dim that 1-in-10 Americans falsely think the moon landings were faked.

The Doomsday Clock indicates the likelihood of a global catastrophe. With the clock sitting at 100 seconds to midnight, there are plenty of problems to take care of here on Earth.

So why are we going back to the moon at any cost?

The NASA-led Artemis 1 mission launched from Kennedy Space Center in Florida on Nov. 16. Several hours later, the huge core stage and twin boosters dropped away, and the Orion spacecraft headed for the moon. It will not land, and it has no crew, but it is setting the stage for a second mission to put astronauts in moon orbit and a third mission that will put them on the surface for the first time since 1972.

The launch was originally set for 2016, and when it was finally ready this year there were four launch-day delays, two for technical issues and two for violent storms near the launch site. As close as a few hours before launch, the countdown was delayed while engineers tracked down a hydrogen leak. It is disconcerting that a $4 billion mission hung in the balance while some nuts were tightened with a wrench.

Delays will continue. The Artemis II fly-by is unlikely to occur before 2024, and the first woman and first person of color will not walk on the Moon (which NASA has committed to on the third mission) before 2025. Meanwhile, Artemis I is preparing for humans eventually living in space by carrying three crash test dummies (and yeast cells) to test for the effect of radiation on tissue and organs.

The Artemis program is named after the Greek goddess of the Moon, who was Apollo’s twin sister. Its 322-foot tall rocket, the Space Launch System, is a slightly smaller sibling to the 363-foot tall Saturn V rocket that took astronauts to the moon decades ago. Its budget is similarly beefy, with lower development costs but higher marginal costs. Artemis launches cost billions because they are based on decades-old Space Shuttle technology and the enormous rockets are not reused.

By contrast, commercial aerospace company Space-X’s smaller but reusable Falcon Heavy rocket costs just $90 million per launch. The company’s upcoming behemoth, the 394-foot tall Starship, is projected to cost as little as $10 million per launch. Even if these estimates are optimistic, Space-X rockets will be a bargain compared to the projected $93 billion that NASA will spend to land two astronauts on the moon.

Which begs an obvious question: Why not let the private sector take over?

The answer is a mixture of local politics and geopolitics. American politicians of both parties have supported the Artemis program and the Space Launch system because it brings an economic benefit to many of their districts. It may be old technology, but it preserves existing, well-paid manufacturing jobs. There is also a concern that some of the private space companies may fail or go out of business.

Actually, it’s good to be woke

The geopolitical motivation comes from the fact that the space race is heating up. After decades of neglect, the moon is in danger of getting crowded. China has had a rover there for three years and six countries plan to visit in 2023. China has completed its own space station and it will cooperate with Russia to put the first elements of a moon base in place by 2030.

We are witnessing an echo of the superpower rivalry in the 1960s that took America to the moon for the first time. When space hegemony is on the table, money is no object.

Chris Impey is a professor of astronomy at the University of Arizona. He is the author of hundreds of research papers on observational cosmology and education, and he has written popular books on black holes, the future of space travel, teaching cosmology to Buddhist monks, how the universe began and how the universe will end. His massive open online courses have enrolled over 360,000 people.