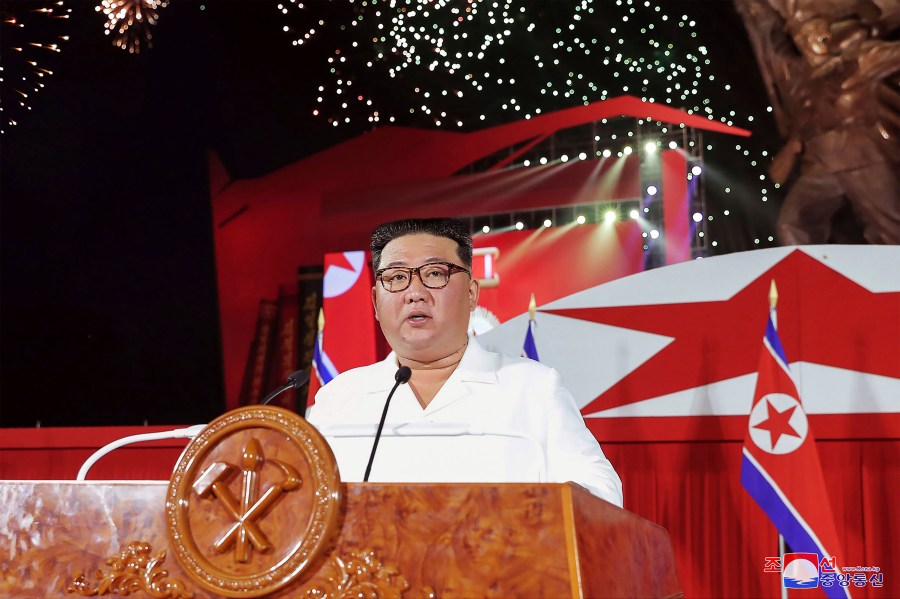 Americans in high places make great statements about human rights in North Korea, but what are we really doing to combat the abuses of the regime?

The answer is, beyond nice talk, President Biden and the State Department have relegated North Korean human rights to a low priority while repeating familiar demands that Kim Jong Un enter talks on his nuclear warheads and missiles. It’s blatantly obvious by now that Kim, if he has no real intention of firing a missile carrying a small tactical warhead, as he has been threatening, is not going to consider perpetual American demands for denuclearization.

So why can’t the Biden administration make a huge issue of North Korea’s record on human rights even though North Korea will go on denying all the charges of execution and torture for the flimsiest of offenses, true or false, real or imagined? The answer in part is that everyone knows repetition of the complaints will not move North Korea. The North Korean leadership is extremely sensitive to all these complaints, going to great lengths to deny them in meetings of the United Nations Human Rights Council and other forums, in editorials and statements. From this response, it’s clear that repeatedly exposing the horrors of a dictatorship that survives on repression and cruelty does have an impact.

For that matter, why is South Korea’s conservative President Yoon Suk-yeol, having endorsed joint military exercises with the Americans, not doing more to reverse the policies of his leftist predecessor, Moon Jae-in, who ignored North Korea’s record on human rights during his presidency while courting Kim? Like Biden & Co. in Washington, Yoon in Seoul appears to have more or less given up on human rights in the North as a lost cause. It’s as though both American and South Korean policymakers think there’s no point to infuriating Kim by carrying on about North Korea’s brutality to its own people while vainly pleading for dialogue.

The subject, however, is not totally dead. Congress in 2004 passed a North Korean Human Rights Act, signed by President George W. Bush. The act comes up for renewal periodically. Congress is expected to renew it when it convenes in November, having put off the topic until after the congressional elections on Nov. 8 in order to deny proponents of the act the chance to brag about it for the benefit of Korean American voters in their districts.

Delays in naming special ambassadors on North Korean rights in both the U.S. and Korea show the ambivalence of policymakers in Washington and Seoul. Biden still has not filled the position. Yoon has named Lee Shin-wha, a professor at Seoul’s Ewha Womans University, as South Korea’s ambassador on North Korean human rights; Moon had left ... vacant for fear of upsetting Kim. Even so, Moon’s adherents in the National Assembly, enjoying a majority of the seats, are doing their best to undermine the North Korean Human Rights Foundation as mandated by South Korea’s North Korean Human Rights Act, passed in 2016 before the ouster and jailing of the conservative Park Geun-hye.

“To its credit, the Yoon administration appointed a human rights ambassador and, for the first time in four years, South Korea signed onto a UN resolution criticizing North Korean human rights violations,” said Bruce Klingner, senior fellow at the Heritage Foundation. “This is a welcome change from the Moon administration’s downplaying of Pyongyang’s violations.”

To Klingner and others, however, Washington’s disinterest in the topic of North Korean human rights is more than a little incomprehensible.

Suzanne Scholte, president of the Defense Forum Foundation, headquartered in suburban Washington, is impassioned about the seeming weakness of both American and South Korean governments when it comes to crusading for human rights in North Korea.

“There’s a lot of talk but no action” on the part of the Americans, she complained. She did seem happy about a statement issued by Ned Price, State Department spokesman, at the opening of North Korea Freedom Week on Sept. 30, in which he said the U.S. “remains committed to shining a spotlight on the egregious human rights situation in the DPRK [Democratic People’s Republic of Korea] and working with allies and partners to promote accountability and increase the free flow of information into, out of, and within the DPRK.”

Those noble words, though, were nothing new. Biden and his people “talk about human rights as the central part of his presidency,” said Scholte. “They’ve been great on the language but no real action.”

Scholte, in her most recent visit to North Korea, delivered an impassioned speech, in which she said “the three most urgent matters before us are saving the refugees in China, calling for the release of those being held against their will in North Korea, and relaunching what had been a most successful information campaign to North Korea.”

Scholte is urging China to show some mercy on hundreds of men, women and children whom China has yet to send back to North Korea thanks to Kim’s closing the borders in early 2020 after the first COVID outbreak was reported in Wuhan, and she actively battled for North Korean defectors to send balloons laden with Tylenol tablets and anti-Kim leaflets. The police, however, blocked a leaflet launch and briefly held the fiery defector, Park Sang-hak, in charge of the launch. She still gets through to North Korea by daily radio programs broadcast from outside Korea that she claims reach as many people as VOA and BBC.

“Yoon needs to do more,” said Scholte. “They’ve got to overturn the leaflet law” — enacted at Moon’s behest as he sought to appease Kim. She said Kim “has been incredibly successful. He put North Koreans back in the dark.” Now, she believes, Biden in Washington and Yoon in Seoul together have the chance to bring light to an oppressed people after Moon “gutted the campaigns led by the defectors.”

Donald Kirk has been a journalist for more than 60 years, focusing much of his career on conflict in Asia and the Middle East, including as a correspondent for the Washington Star and Chicago Tribune. He currently is a freelance correspondent covering North and South Korea. He is the author of several books about Asian affairs.