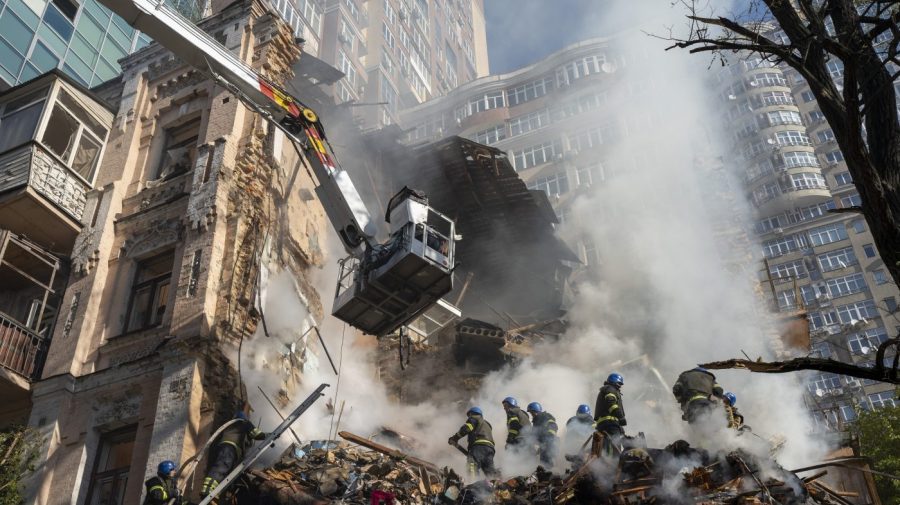 As Iran’s “kamikaze” drones add to the terrible destruction the Putin regime has unleashed on Ukraine, it is fair to ask what practical difference the G7’s International Expert Conference on the Recovery of Ukraine can make in the lives of the Ukrainian people now.

Those who are gathering in Berlin today — representatives from international organizations, think tanks, the Ukrainian and donor governments — can be successful, even during the ongoing war, if they recall one of Henry Kissinger’s definitions of leadership: Leaders have “the task of taking society from where it is to where it has never been … to build arising circumstances into a vision of the future.”

The obstacles to launching a realistic program to support Ukraine’s recovery in Berlin are daunting, even as the world remains inspired by Ukraine’s remarkable resistance and resilience. Thousands of Ukrainian soldiers and civilians are dead. Millions of refugees abroad are without homes in their own country. Russian troops occupy portions of eastern and southern Ukraine, and Russian shelling in and around Kyiv is the worst since the invasion started. Towns and villages have no power because Putin is intent on destroying Ukraine’s electrical grid.  Estimates are that Ukraine suffers about $4.5 billion in infrastructure damage each week because of Russia’s brutal and indiscriminate shelling. Winter will bring more pain.

How can the delegates in Berlin best support Ukraine as it defends its sovereignty and struggles to shape a vision for its future? The United States and European governments have spent billions of dollars providing weapons and budget support since the war began.

Beyond ensuring the foundational objective — that these commitments continue to create adequate security for rebuilding — the conference must get at least three things right to address urgent needs.

First, the conference must identify and agree on the right goals for short-term assistance. While eventual total costs are likely to be in the hundreds of billions of dollars, the Rapid Damage and Needs Assessment published in August by the government of Ukraine, the World Bank, and the European Commission identified a $3.4 billion short-term target for immediate reconstruction needs, followed by a $17 billion funding goal for 2023. Addressing immediate, crucial reconstruction requirements that meet the basic needs of the Ukrainian people, create economic activity and deliver social services is the realistic path to longer-term reconstruction.

Second, the conference can help choose the right projects for accessible parts of Ukraine for these first initiatives. Millions of displaced Ukrainians want to return home and rebuild. Reconstructing homes, businesses and essential infrastructure and restoring access to power and water are obvious priorities. If some of these projects can simultaneously support Ukraine’s bid for EU membership and feature green technology, so much the better.

Third, the conference must identify the right actors and processes to provide the best chance for an immediate, efficient and transparent reconstruction effort. U.S., European, and other governments assisting Ukraine can channel funds to established multilateral institutions which oversee development financing, such as the European Bank for Reconstruction and Development and World Bank. Given legitimate worries about governance, any preliminary funding structure needs to be resolute that anti-corruption benchmarks must be met while enabling Kyiv to lead as much of the reconstruction effort as possible.

A key to choosing the right actors and processes is to find and empower organizations that have experience designing and successfully executing quick response strategies. (My company, The Cohen Group, works with clients in the architecture and engineering sectors.) These entities include humanitarian response agencies, NGOs and the private sector. Companies with expertise from other post-disaster zones such as Haiti, the Balkans, Afghanistan and Iraq can play a central role in leading project management efforts in Ukraine. Private sector leaders are ready to work with Ukrainian central authorities and local communities and with international agencies to streamline logistics, provide damage assessments and proposed solutions, and help provide oversight of the taxpayer’s money.

The Ukrainian people and government are sure to show as much determination in rebuilding their territory as they have shown in defending it. If the delegates in Berlin commit as energetically to Ukraine’s recovery and reconstruction as they have to the country’s defense, today’s meeting can make a difference. It will be an important first step toward making today’s dire circumstances the foundation of a new future for Ukraine.

Marc Grossman is a former undersecretary of State for Political Affairs and ambassador to Turkey. From 2011-2012, he served as the special representative to Afghanistan and Pakistan. He is currently vice chairman of The Cohen Group, a strategic business advisory firm led by former secretary of Defense William S. Cohen. The Cohen Group has clients in the architecture and engineering sectors.