Plot: Half brothers Raymond and Ray reunite when their estranged father dies – and discover that his final wish was for them to dig his grave. Together, they process who they’ve become as men, both because of their father and in spite of him.

Review: Of the actors working today, few are more reliable than Ewan McGregor and Ethan Hawke. Both actors have done their fair share of genre work and both have recently been involved in the comic book industrial complex, both as villains. While Ethan Hawke has made his disdain for mainstream filmmaking quite clear, both actors have done admirable work with roles that would have been underwhelming in the hands of other actors. When the two actors were set to share the screen in Raymond & Ray, I expected something special as the pair play adult siblings coping with the death of their abusive father. Unfortunately, Raymond & Ray wastes two excellent actors who are barely able to rise above the meandering and underwhelming story.

Raymond & Ray opens with Raymond (Ewan McGregor) visiting his brother Ray (Ethan Hawke) to tell him their father has passed away. Over the first twenty minutes of the film, the two brothers exchange dialogue that feels like it was written for a stage play with their delivery stilted and slightly off. At first, I thought this was an intentional choice, but the weak writing pervades the entire movie. As the brothers travel to their father’s funeral, they face the reality of moving on with their broken lives, they reflect on the various events that led them to be the men they are today: Raymond a divorced father with a drinking problem, and Ray a has-been musician who emulates his womanizing dad. Neither is happy and both are shocked to see the way their father was viewed by those around him in his final years.

Writer/director Rodrigo Garcia tries to throw a curveball at the two siblings when they learn their father has requested they dig his grave and bury him themselves. It seems like the kind of quirky twist that many indie dramas are built on, but here it quickly loses its charm and turns into just a brief redirection of the story. As Raymond and Ray prepare to bury their dad, they look back at the possessions he left for them and how they feel about him before and now. Ultimately, this is a story about redemption and grief and how the two go hand in hand, but it just never feels authentic. The supporting characters all exist for the purpose of helping the two main characters overcome their emotional burden, but it doesn’t really work. Despite some solid work from Sophie Okonedo as Kiera, the nurse to their late father, and Maribel Verdu as Lucia, the deceased’s former lover and landlord, as well as the always great Vondie Curtis-Hall as Reverand West, the film just plods depressingly along through darkly comic moments and serious ones in equal measure.

Once the grave begins getting dug, Raymond and Ray must also contend with siblings and family they never knew they had. It is clear that the story Rodrigo Garcia aimed to tell was one about life and death and what it all means, but it just never clicks. Ewan McGregor and Ethan Hawke have long been adept at building fully human characters out of even the thinnest screenplays and in a year when both have shown some of their best work in years, Raymond & Ray feels incredibly underwhelming. No, not underwhelming, but rather very cliche. Many of the beats of this story feel telegraphed from the very beginning and are betrayed by the clunky script that never feels nearly as smart as it thinks it is.

Watching the trailer for this movie, I was expecting it to either be a bleakly feel-good movie or an inspirational one. Sadly, it is neither. Rodrigo Garcia has made some good movies like Albert Nobbs, but this fails to capture the magic of that film. Even with producer Alfonso Cuaron on board, Raymond & Ray never rises above the benefit of having McGregor and Hawke share the screen. At times, both actors deliver some great work but it tends to be when only one of them is the center of attention. Still, I do have to say that there are some highlights of this movie, namely the musical score by Jeff Beal and the languid cinematography by Igor Jadue-Lillo.

Raymond & Ray is a movie that I would have loved had it benefited from a screenwriter with a stronger gift for dialogue. Throughout the film, I wanted this movie to be a different one whether in regards to the tone, the style, the twists, or the ending. In the end, I just wish this was a wholly different project for Ewan McGregor and Ethan Hawke to have collaborated on. There is a message here about letting go of your past and exorcising your demons, but Raymond & Ray never comes close to actually living up to what it set out to do. This is a very forgettable movie that is probably not worth the time despite the solid cast and two leading actors. 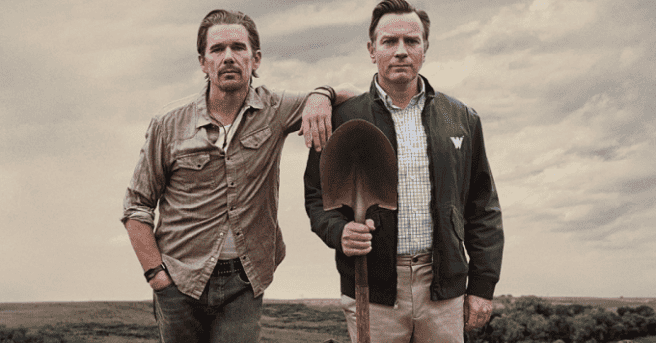