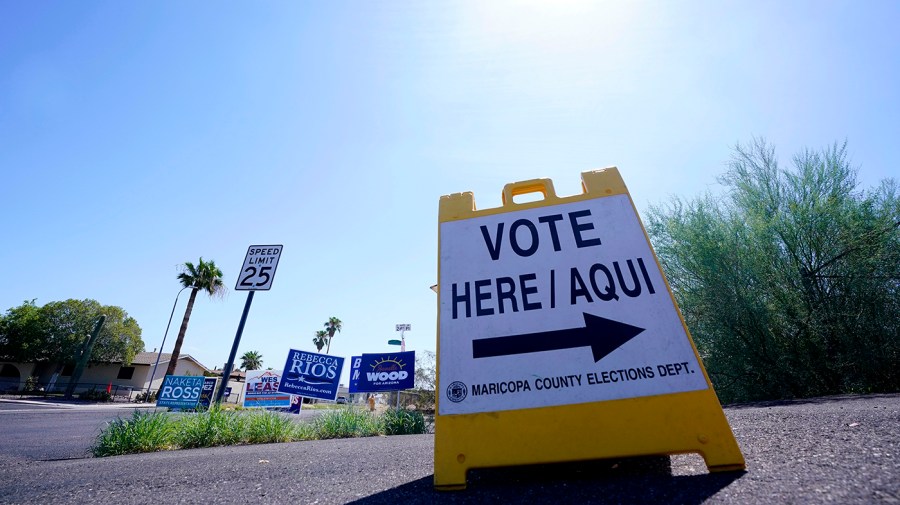 A new lawsuit filed in an Arizona federal court alleges an organization called Clean Elections USA has engaged in a “coordinated campaign” to intimidate voters from depositing ballots at drop boxes in Maricopa County through the use of armed vigilantes.

The Arizona Alliance for Retired Americans and the national organization Voto Latino said in a complaint filed Monday that at least five times last week armed and sometimes masked supporters of Clean Elections USA have intimidated voters at ballot boxes.

The lawsuit directly accuses Clean Elections USA founder Melody Jennings of orchestrating a campaign to intimidate voters, which they said violates the Voting Rights Act of 1965 and the Ku Klux Klan Act of 1871 preventing conspiracies and acts of intimidation that threaten voters.

The groups are asking for an immediate temporary restraining order halting the activity.

The Hill has reached out to Clean Elections USA for comment.

On Monday, Jennings wrote on her Truth Social that she wasn’t trying to “stop” anyone from voting and voters were “most welcome to drop off a ballot.”

Clean Elections USA describes itself as a “grassroots organization made up of law abiding patriots whose goal it is to preserve the integrity of our elections.”

Over the weekend, Maricopa County officials raised the alarm about vigilantes dressed in tactical gear intimidating voters at the ballot box.

“Although monitoring and transparency in our elections is critical, voter intimidation is unlawful,” the Maricopa County Board of Supervisors chairman and the county recorder wrote in a joint statement. “For those who want to be involved in election integrity, become a poll worker or an official observer with your political party.

“Don’t dress in body armor to intimidate voters as they are legally returning their ballots,” they added.

In the lawsuit, Jennings is accused of recruiting and encouraging supporters to photograph, monitor and record voters at drop boxes, citing a conspiracy theory that so-called mules are depositing forged absentee ballots and depositing them in drop boxes.

The conservative documentary “2000 Mules” popularized the theory of stuffing ballot boxes and falsely claimed widespread fraud in the 2020 election.

Jennings is a believer in the “2000 Mules” documentary and is promoting the ballot watching campaign through the #Dropboxinitiative2022 on Truth Social, according to the lawsuit and posts on her account.

In one post shared in the complaint, Jennings allegedly instructs followers to go out in groups of at least eight people, which she said was the best method to capture “mules” on camera to “make them shrink back into the darkness.”

Voters have filed complaints with the Arizona secretary of state regarding the acts of intimidation.

One voter said they were intimidated at a ballot box in Phoenix by “camo clad people” who took pictures of them and their license plate, according to the lawsuit.

Jennings has called for more ballot watchers in California, Washington, Nevada, Illinois, New York and other states, according to posts on her account.