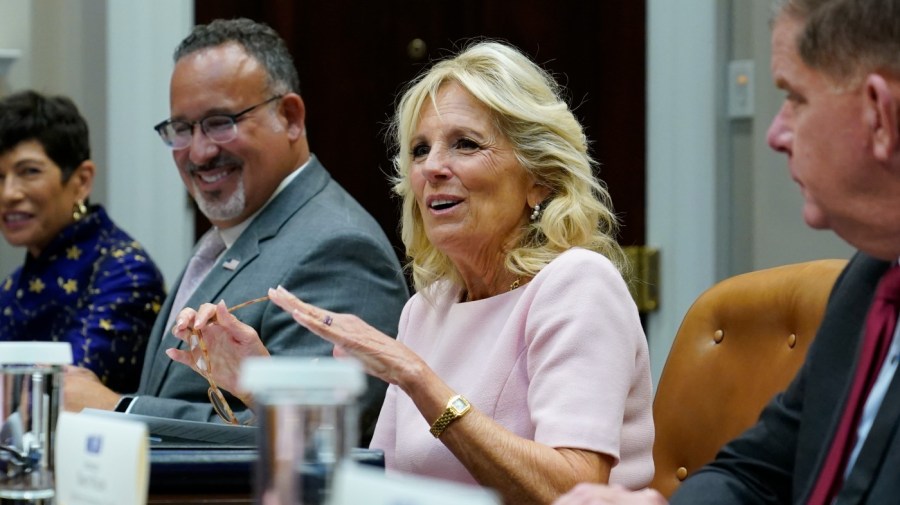 First lady Jill Biden will campaign with New Hampshire Sen. Maggie Hassan (D) in the state this weekend in the final days before the 2022 midterm elections.

The White House said in a statement on Tuesday that Biden will travel to the cities of Manchester and Portsmouth on Saturday for a few events with the state Democratic Party and Hassan, who is attempting to win reelection against Republican Don Bolduc.

Biden has visited several key battleground states as the midterm election cycle comes to a close, making stops in states like Georgia, Florida and Wisconsin in the past week. The first lady has focused on discussing education, the military and COVID-19, but she has also worked to fundraise for Democrats.

Most other recent first ladies have campaigned throughout the country ahead of the midterm elections, but Biden has been traveling to various states for months to promote her initiatives and support Democratic candidates.

Polls have shown Hassan comfortably ahead of Bolduc, but some have shown her lead narrowing. A GOP pollster found her leading by a 2-point last week, while an Emerson College poll showed her ahead by 3 points on Monday, both within the margin of error.

New Hampshire would be a key pickup for Republicans looking to retake the majority in the Senate, but the GOP has pulled millions of dollars out of the race and focused elsewhere as Election Day nears.

The National Republican Senatorial Committee, the GOP’s Senate campaign arm, redirected millions to other states earlier this month, and a Republican super PAC aligned with Senate Minority Leader Mitch McConnell (R-Ky.) said last week that it would withdraw spending from the race.

Brain Teaser: Can You Solve This Number Puzzle?

How to Monetize Your Entertainment Blog