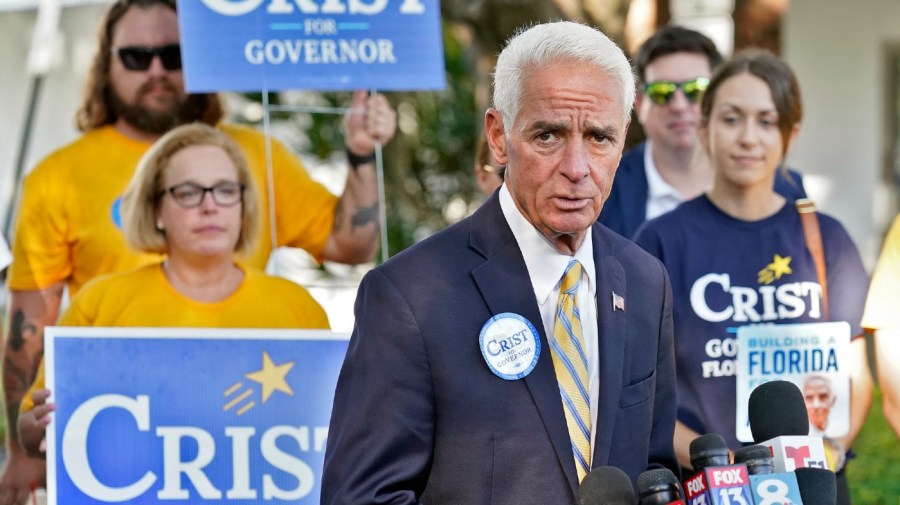 Democratic gubernatorial candidate Charlie Crist on Tuesday said “we all know” that his opponent, Florida Gov. Ron DeSantis (R), is using the governorship as a “stepping stone” toward a 2024 White House bid.

Crist told Fox News Channel’s “America’s Newsroom” that when he asked DeSantis what his ambitions were during a debate last night, the Republican governor was caught “like a deer in the headlights.”

“He couldn’t answer the question. And he wasn’t going to be honest with the people of Florida,” Crist told Fox News anchor Bill Hemmer. “Look, he’s running for president, I think we all know that. He wouldn’t admit it last night, but that’s what’s happening.

“And when you do that and you’re traveling all over the country in the way that he is, raising money and doing other things to try to promote that ’24 race, you don’t pay attention to our property taxes, our property insurance, that are going up,” Crist added.

During an hourlong debate Monday night, the Democratic candidate repeatedly asked if DeSantis would commit to serving another full four-year term in the governor’s mansion — a question the Republican governor would not answer.

DeSantis is seen as a rising star in the GOP and polls continue to show that he garners even more favor than former President Trump.

Despite the attacks on DeSantis’s personal ambitions, Crist, a former House lawmaker who also served as Florida’s governor from 2007 to 2011, is lagging far behind in polls and likely failed to achieve the knockout win on Monday night that he needed.

Still, Crist said on Tuesday that forcing DeSantis to answer questions about his presidential aspirations, and allowing voters to see him dodge them, was a victory.

“I think he needs to be honest with the people of Florida and he wouldn’t answer the question last night,” the Democrat said. “We all have to ask ourselves, why wouldn’t a man do that? What kind of character does that, you know? I’m running for governor to be governor.”

How to Remove Clothes From a Photo Online