“I always tell people when I became Elvira, things got normal,” Cassandra Peterson says at one time during her interview with HollywoodLife. Understatement of the year. As read in her memoir – Yours Cruelly, Elvira, now out in paperback via Hachette Books – Cassandra’s life was bordering on stranger than fiction long before she donned the skin-tight velvet gown and black beehive wig to become Elvira, Mistress of the Dark. In the first fifth of the book alone, she details making out with Jimmy Page, getting a fatherly lecture from Frank Zappa after running into The Mother of Invention, and having a deep, political conversation with Jimi Hendrix. And all this happens thirty pages before she details a life-changing evening spent with the King of Rock himself, Elvis Presley.

“It was one of the most fun parts of writing my book,” Peterson tells HollywoodLife, “finally being able to talk about music and what it was like back then, to be kind of a groupie. I’d call myself a groupie then, which had a completely different connotation than it has now. It wasn’t like, you know, booty calls. It was like, women who were muses, who really wanted to be with this band.”

“I think what I really wanted to do was be in a band, but there weren’t really any women rockers back then,” says Peterson. “They were starting to kind of happen in the early sixties, like Grace Slick with Jefferson Airplane. And then, Janice Joplin. They started coming out but still – they were the singers. They weren’t playing the guitar, they weren’t playing the instruments, and they were very few and far between.

“So, I just wanted to be around musicians,” she says. “I wanted to be one. But if you couldn’t be one, the next best thing was being with one.”

Cassandra Peterson would “be” with the biggest one of all: the King. In the early chapters of the autobiography, Peterson details an unyielding love of Elvis. His film, Blue Hawaii, lead her to become a showgirl. Kismet would eventually see Cassandra spend a night of unfiltered intimacy with Elvis in the penthouse suite of a Las Vegas hotel.

“You know, in a funny way, I’ve always described it at —  because I wasn’t telling people the details of it – ‘Oh, I spent a night with Elvis. I had a date with Elvis.’ I didn’t know how to describe it to people. And that kind of insinuated that I had sex with Elvis,” she explains. “Unfortunately, I did not. I wish I would’ve. But, I was seventeen. Elvis had enough people around him there that wouldn’t let that happen. And I don’t even think that was his intent. I mean, he really, really liked talking, and I loved just sitting there listening to him. And I think he changed so many things for me. He really changed my outlook on everything in that one evening.”

That outlook led her on the road out of Vegas, but one companion who came along for the ride was music. 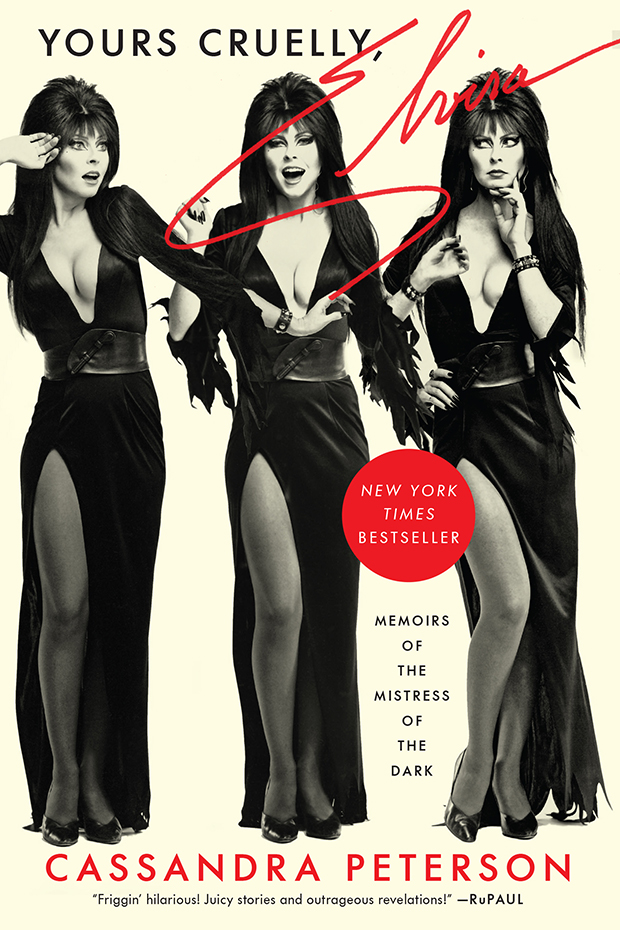 Upon its initial publication in 2021, Your Cruelly made headlines over two major revelations – one bad, one good. In the memoir, Peterson alleged that the late Wilt Chamberlain sexually assaulted her during a party in the 1970s; sadly, not the only instance of sexual harassment she endured. However, she also shared that she found her “Happily Ever After” in the fourth reel: a two-decade-long relationship with her partner, a woman by the name of “T.”

While these stories nabbed the spotlight and helped Yours Cruelly, Elvira become a New York Times bestseller, it feels like a few fine details were lost in the excitement. Like, how she had a date with a pre-Godfather II, Robert De Niro, after a chance meeting at a party. Or how she took acting classes with a pre-Wonder Woman Lynda Carter. Or how she almost cast Brad Pitt in her 1988 movie,  Elvira, Mistress of the Dark, only to sell her house to him years later.

Throughout her incredible journey – from Vegas to Miami to Rome and back – music remained a vivid part of Cassandra Peterson’s story. Eventually, an opportunity for her to live out her teenage rock and roll fantasy arrived after she returned to L.A., and graduated from The Groundlings, the now-legendary improv and sketch comedy troupe. In May 1982, a year after landing the gig of Elvira and launching Movie Macabre on KHJ-TV, the show aired a 3D broadcast of Vincent Price’s The Mad Magician, along with interstitial skits (also shot in 3D.)

According to Yours Cruelly, Elvira, nearly three million pairs of “cheesy cardboard glasses” were sold at 7-11 stores in Southern California ahead of the broadcast. Pairs were also included in copies of “3-D TV,” a special 12″ maxi-single featuring one of the songs from the episode. “3-D TV (Three Dimensional)” featured Peterson, as Elvira, as the lead vocalist, backed up by her “Vi-Tones”: her fellow Groundlings John Paragon (Peterson’s dear friend, writing partner, and actor best known as Jambi the Genie from Pee-Wee’s Playhouse), and Paul Rubens, Pee-Wee Herman himself.

“I’ve been telling people, but they can’t believe it,” she tells HollywoodLife. “That was Paul, standing in my bathtub with the shower curtain drawn, singing back up.”

While some might have a hard time wrapping their heads around Pee-Wee Herman and Elvira, Mistress Of The Dark, being bosom buddies, Paul and Cassandra’s friendship goes back. There’s even an Internet-iconic photo of the two of them dressed up in full New Wave fashion alongside “Hey Mickey” singer Toni Basil.

“That was a fun night,” Peterson says with a laugh when asked about the photo. “We were all wearing wacky wigs – and Oh, God, I don’t even remember. I think because we were all, you know, having too good of a time. But that is an awesome photo. I love Toni Basil.”

“That was at the house that I had at the time, and every weekday and every weekend, Paul was over, John Paragon was over, and then we’d have other people, whoever were in town. Like, Toni Basil and – I mean, Phil Hartman was with us a lot of the time.” The next memory brings forth a laugh from her. “We would all get together and just, I don’t know, smoke some weed, have a few drinks. The next thing you know, we were putting on wigs and putting on shows. It was so fun.”

“We had the best, best, best time together back then, and all of our careers were kind of on this really nice uphill trajectory. We were all like breaking out of The Groundlings and getting shows and getting work,” she adds. “And so, it was a very exciting time, and it was nice to have them with me because the same thing was happening to them. And it kept all of us very comfortable that we had somebody along for the ride.”

Though participating in The Groundlings was “very, very competitive,” says Peterson, with everyone competing to be in the show every night, the pressure forged bonds that lasted for decades. “We had this fantastic camaraderie where we were so close,” says Peterson. “I mean, I feel like I could read everybody’s mind. We were just like one brain.”

“So it was kind of like high school, you know? You have all these friends, you love them and everything, and at the same time, it’s very backstabbing at moments. It was a weird, weird scenario. Comedians are, are weird. What can I say?” she says with another laugh.

Los Angeles was fertile with excitement and possibility in the 1980s, with future stars and legends crossing paths. One such case happened on New Wave Theatre. The show, whose history is captured in Josh Frank and Charlie Buckholtz’s In Heaven Everything Is Fine, featured, featured acts from L.A.’s underground punk, goth, and New Wave scene, along with appearances from rising talents like Chevy Chase, Jim Belushi, Harold Ramis, Beverly D’Angelo, and David Lynch made appearances as “Ghost Hosts.” In 1982, Cassandra, in full Elvira drag, appeared on an episode alongside host Peter Ivers. “Elvira and I make such a perfect couple, we may get married,” said Ivers before throwing it to one of the episode musical guests, revolutionary punk band Red Wedding.

“I do remember,” says Peterson when asked about her time on the show. “I don’t remember what I did, but I remember New Wave Theater. Oh my God.” While she couldn’t share any behind-the-scenes insights into the filming or the skit she did as a Ghost Host (an ad for a “truth”-paste made out of sodium pentothal and amphetamines), LA’s punk and new wave scene remains as ingrained in Cassandra Peterson as her fingerprints.

“I remember New Wave,” she says. “I was all over New Wave. Everything was happening in LA at that time. It was so fantastic. I was working for Don Kirschner’s Rock Concert. This was before I was Elvira and was also a DJ at KROC in LA. I was going out every single night, just scouring the clubs, looking for new artists. And there were all these bands like Oingo Boingo, The Go-Go’s, The Cramps — it was just like insane. It was just all these bands starting out, and the music just getting better and better.”

“I mean, I love sixties music,” she continues. “I play all day – I’m listening to Led Zeppelin, Jimi Hendrix. The seventies, not so much. There was some good music in the seventies, but in general, I thought music went downhill. And then, in the eighties, it started going back up with punk and New Wave. It still obviously holds up.”

Cassandra Peterson’s said that she “had a lot of stories that I couldn’t include in [Yours Cruelly, Elvira] because the book would’ve been as long as The Bible.” This begs for a sequel, like any good horror movie (or, at least, a SiriusXM radio show or an ongoing podcast series.) “I just had to pick the more well-known players,” she says when discussing a possible second memoir. “I would love to get into that more. I still am a music geek, and I still love hanging out with bands. I love music, and I don’t think that’s ever going to change.”

With that said, what does Cassandra Peterson – Elvira, Mistress of the Dark – have to recommend for The Sound of Halloween, HollywoodLife’s running playlist of Halloween music? “Well, my record, ‘Haunted House,’ or ‘Monster Rap,’” she says, referring to the original songs included on 1994’s Elvira Presents Monster Hits and 1995’s Elvira Presents: Revenge Of The Monster Hits.

“Other songs that I love for Halloween?” she ponders. “Oh my god. Well – yeah, okay. This is my all-time favorite Halloween song, and it’s the most ridiculous, most horrible song ever. It’s ‘It’s Halloween’ by The Shaggs. Ah, it’s so fantastic! But, I like bad, schlocky stuff, as you might know. Maybe ‘Welcome To My Nightmare’ by Alice Cooper, who I am a huge fan of and always have been. Anything by The Cramps.”

“I could give you a list a mile long of good, spooky Halloween music,” she says at the end of the conversation. It’s true. She could have mentioned “2 Big Pumpkins,” her 2013 single released on Jack White’s Third Man Records. Or spoke about working with Fred Schneider of The B52s for 1994’s “Here Comes The Bride (The Bride of Frankenstein)” Or Ghoultown’s “Mistress of the Dark” and how she starred in the song’s music video. But, like any good entertainer – especially in the horror business – Cassandra Peterson knows to leave ’em wanting more.

Cassandra Peterson’s Yours Cruelly, Elvira is out now in paperback from Hachette books.

Jeetendra: I listen to songs of my golden period