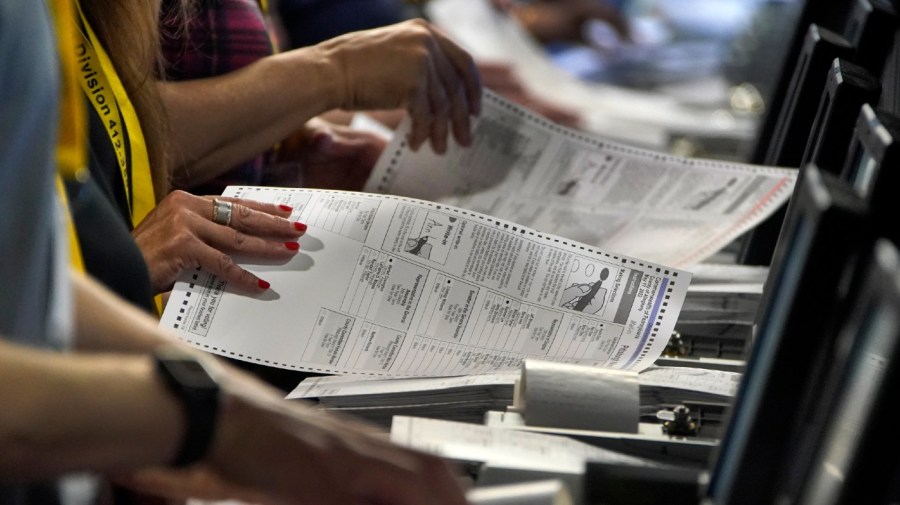 More than 9 million Americans have already cast their ballots two weeks ahead of the midterms, according to the United States Elections Project.

Around 2.5 million have cast early votes in-person, and 6.8 million mail-in ballots have been returned — for a total of more than 9.3 million early ballots across 35 states reporting data so far.

One week ago today, just 2.7 million had cast their ballots during early voting, according to an earlier update from the project, led by University of Florida professor Michael McDonald.

California and Florida are in the lead with the most ballots cast so far this year, each with more than a million votes logged.

In Georgia, which has had record midterm turnout during early voting so far, nearly a million votes have been cast.

Among 17 states reporting party affiliations, about 50 percent of ballots were cast by registered Democrats, while around 30 percent were from registered Republicans.

Many Republicans may be resistant to mail-in voting in the wake of former President Trump’s claims that the 2020 election was stolen from him. During the 2020 presidential election, a large portion of Americans voted via mail-in ballot amid concerns about the spread of COVID-19.

In 2020, Republicans were less likely than their Democratic counterparts to cast early ballots.

GOP activists have recently urged voters in their party to hold on to their mail ballots until they can cast them in-person on Election Day.

Some states have long relied on the mail-in ballot model, while others expanded mail-in voting during the COVID-19 pandemic. Nearly 42 million mail-in ballots have been requested nationwide, according to the Elections Project.

Around 122 million Americans voted in the 2018 midterm elections, Census data shows — of that figure, 16.7 percent of voters cast early ballots, and 23.2 percent voted by mail.