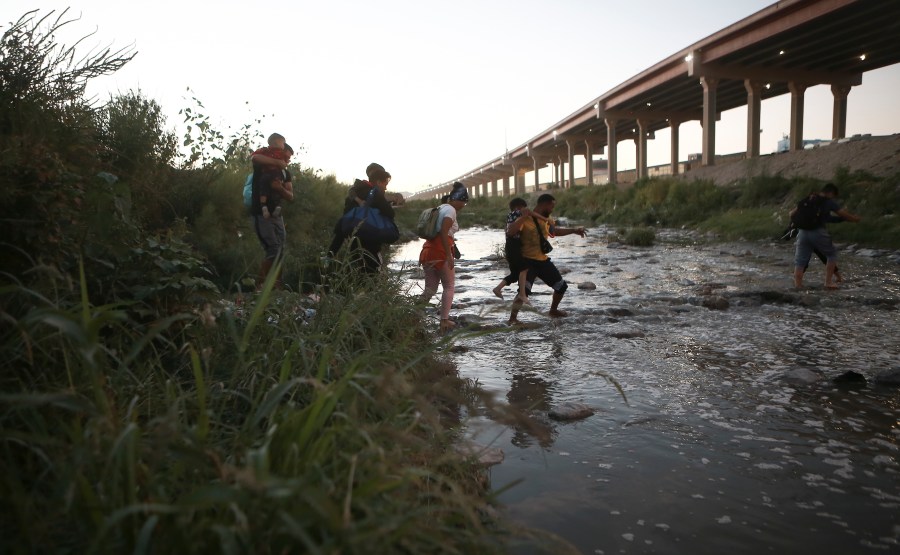 The Border Patrol had 2,206,436 encounters with illegal crossers at the Southwest border in fiscal 2022, the highest number of illegal crossings recorded since at least 1960, which is when the government began tracking illegal crossings. These statistics do not include “gotaways” or migrants who succeed in crossing without being detected.

According to DHS’s Inspector General, the Border Patrol is only denying entry to a very small percentage of the illegal crossers it does not expel under Title 42. The ones who are not expelled are released into the country after a 72-hour screening at overcrowded holding facilities.

Nevertheless, DHS claims that the objective of its border security measures is to ensure the safety and security of our borders while managing a safe, orderly, and humane immigration system.

How can DHS ensure the safety and security of the border if it is admitting almost all of the illegal crossers who are not expelled under Title 42 knowing little, if anything, about them or their intentions?

Moreover, safety and security aren’t the only considerations. The sheer number of illegal crossers has overwhelmed our immigration system and resulted in serious unintended consequences.

No one knows how many migrant deaths have not been discovered.

During the first nine years of the Office of Refugee Settlement’s (ORR) Unaccompanied Children Program, fewer than 8,000 children were referred to ORR annually. That number skyrocketed to 122,731 in fiscal 2021. This resulted in having to detain unaccompanied children at overcrowded Customs and Border Protection (CBP) holding centers.  To get them out of these centers as quickly as possible, ORR opened emergency intake sites (EIS) to supplement existing shelters.

Members of Congress, child welfare advocates, and staff at ORR facilities raised concerns about inadequate case management at the Fort Bliss EIS. Consequently, the Office of Inspector General (OIG) at HHS conducted an investigation of conditions at that facility.

The OIG found, among other things, that ORR had to employ nearly 300 case managers within a month of opening the EIS at Fort Bliss, and it was not able to meet this need with experienced case managers. It had to hire inexperienced managers, which increased the risk of releasing unaccompanied children to unsafe or simply inappropriate sponsors.

According to Andrew R. Arthur, a former immigration judge, the 17,000 Border Patrol agents are so overwhelmed by apprehending and processing nearly 6,000 illegal border crossers a day that they have failed to perform the purely ministerial task of sending copies of the Notices to Appear (NTA) that initiate removal proceedings to appropriate immigration courts.

The Border Patrol frequently fails to file copies of the NTAs with the appropriate courts. Immigration judges dismissed 63,586 cases in fiscal 2022, because they have no jurisdiction when an NTA has not been filed.

4.  Waiting years for a hearing

Immigration courts have increasingly been unable to adjudicate the volume of cases they have received during the Biden presidency, and this is reflected in backlog increases. When Biden started his presidency, the court’s backlog was just under 1.3 million cases; as of the end of September, it had increased to more than 1.9 million cases, and the average wait for a hearing was more than two years — 795 days.

The administration has tried to deal with this problem by hiring more judges. But some observers have raised concerns about the qualifications of the new judges, many of whom lack immigration law experience.

DHS also has established a new process for adjudicating asylum applications. Migrants encountered at the border who establish a credible fear of persecution in expedited removal proceedings will be referred to U.S. Citizenship and Immigration Services (USCIS) for an Asylum Merits Interview. If USCIS does not grant asylum, the migrants will be referred to the immigration court for streamlined removal proceedings in which the migrants will have another chance to submit an asylum application.

Why would the administration give USCIS a new workload? USCIS couldn’t handle the case load it already had. As of June, it had a backlog of around 5.2 million immigration benefit requests, with an additional 8.5 million pending requests that are not in the backlog yet because they aren’t ready for adjudication.

Moreover, although this may benefit many asylum seekers arriving after this system is fully operational, it won’t help asylum seekers already in removal proceedings who have been waiting a long time for a hearing.

The fiscal year 2020 Enforcement Lifecycle Report (report) indicates that many migrants who are permitted to remain in the United States while they wait for a hearing do not leave even if their asylum or other applications for relief are denied and they are ordered to leave the country.

The report describes the final or most-current outcomes — as of March 31, 2020 — associated with 3.5 million illegal border crossers and inadmissible migrants who arrived between 2014 and 2019.

Overall, only 59 percent of their cases had been resolved: 14 percent of them had been granted some form of relief and allowed to stay in the country legally, while 86 percent had been removed from the U.S. The vast majority (74 percent) of the rest — over 1 million people — were still being processed and waiting for a hearing. But there were also a fair number who had been ordered to be removed from the country but were still here; the vast majority of them — 238,072 people — hadn’t appeared for their hearing and were ordered removed “in absentia.”

There’s no reason to believe those people will leave voluntarily.

It’s also worth noting that those numbers are for a period before the surge at the southern border really ramped up, a period of six years when there was a combined total of 3.5 million crossers. There were nearly that many — more than 2.2 million — last year alone.

How much worse does this situation have to get before the administration will acknowledge that there is a border crisis and do something about it?